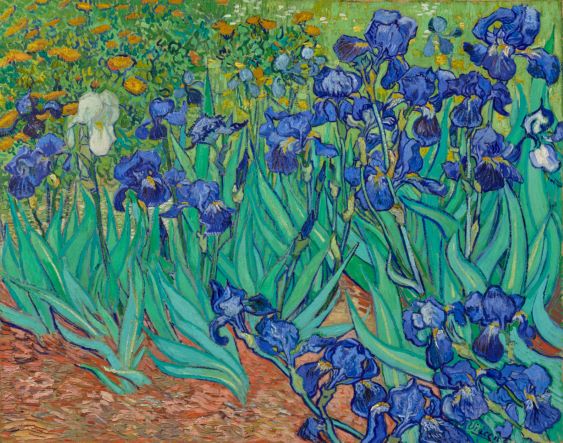 I was fortunate to see Van Gogh's Irises at the Getty a couple of years back. Mutilated marble statues of Roman Gods...a Monet cathedral in underwater mist...a Cezanne of a woman with bleeding pink eyesockets...and yet amongst that cascade washes up a field of blue paint flowers in the dam of the museum gallery.

What took me by surprise was that the painting moved. Or rather, that the painting was capable of moving with me as I stepped to the right of it to get a clearer view. What was once a wallpaper on my phone, vibrant though it was, suddenly created a perspective for itself, leaned out to touch the eye through its thick accumulations of oil-on-canvas. In that instant brush with the art object I saw its depth and texture instantly outmanuever what had once been to me a flat image. (To be clear, I am normally in league with the Walter Benjamin/John Berger school of celebrating the radical potential of the work of art in the age of mechanical reproduction...but I'm presented here with a state of exception.) Van Gogh's brush strokes don't simply congeal and swirl around and around, but spiral outward. The Irises are not simply a pastel projection. They are a fellow occupant in space.

Authenticity has nothing to do with this encounter. Irises hang thick in the air, yes, but this is no aura that unfurls and annihilates the frame so. Besides the fact that this Irises in the Getty is one of four known copies attributed to have known Van Gogh's hand, there is the poorly kept secret that -out of investor's greed or seller's guile- the painting in front of me might be a fake. But let's say that's the case, then; the forger, by her hand, is a more subtle and precise interpreter in that moment than a legion of art critics and provenance-makers. In the heart of deceptive possibilty, the forger is a true disciple of Van Gogh, for she is not content to just repeat the image like a study, but to emphasize and carry outward the bursting wildness of Van Gogh's ceasless brushstrokes. Other paintings -even within that same museum gallery- justify themselves in a display of skillfuly propriety, chastely sinking their oils into canvas and away from this world we call the Real. This, supposedly, is a sign of their mastery of manner and form. Van Gogh has no patience for this. He compels his painting to project into the atmosphere, dragging the World into delirious conflict with its physical and conceptual forms.

It's at this point that I ought to remind you that Artaud was always right about Van Gogh, none more so in this moment then when he points out Van Gogh's devotion to the ways of the storm cloud. When Artaud speaks of gyratory parades and tempestuous transmutation and using the brush as a club to batter at all the forms of existence, he rightly emphasizes Van Gogh's manic desire to render the world into the cloud formations he loves so much. What is overlooked, however, is that although the maniac will abandon -even destroy- all in the pursuit of the one adored object, there are rare, subtle moments where the maniac can convince or divert the world to enter a conspiracy of the consumption of all by propogating the beloved. (This is the alchemist's secret: "That which is above is like that which is below...for the purpose of that one great work.") The clouds cannot exist without a sky to be carried in or rain to evaporate in the rays of the sun. The iris cannot wave in the fields with the grass and the weeds if the breeze were not there to caress it so, if the bee were not there to carry its pollen. It's the nature of clouds to be carried by the wind, to stretch and billow with the shift of atmospheric current. Van Gogh cannot live forever lost in the sky, but he can unleash his Irises, have his paintings live on as a disturbance in the air, to summon the whirlwind with the dervish of its presence. Even if the painting appears to be at rest, when it dreams, it dreams that its observer is a cloud, and breaths it so.